Morning or Afternoon Sydney Highlights Tour with a Local Guide 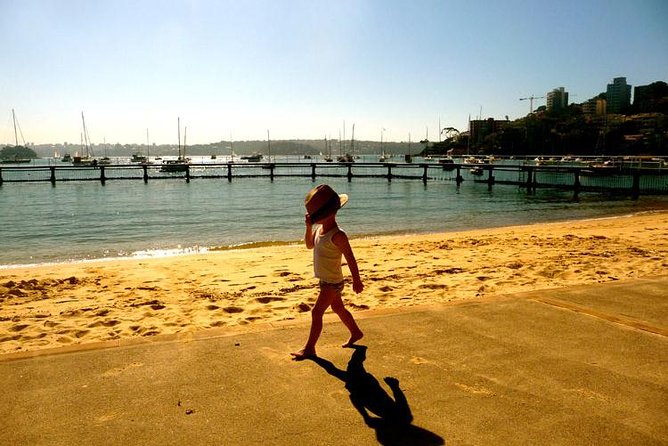 The oldest part of (white) Australia. It is where Captain Arthur Philip started the first penal settlement on 26 January 1788. Now a lively & romantic area with plenty of shops, bars and restaurants.

The highest point in the inner-city, where in 1858 the Observatory was built to keep the timer and observe the Southern Cross. Now a museum, a cafe and a favourite location for weddings.

Right by the Sydney Harbour Bridge. From the Ivy Steps we marvel at this beautiful part of the harbour, with views on the bridge and the Sydney Opera House.

Spot where Elizabeth Macquarie, Lachlan's second wife, loved to wait for tall shops to come in from England with letters from home, furniture and clothes.

Her husband had a seat carved for her out of the sandstone: Mrs Macquarie's Chair is an attraction, and a good excuse to take in the views over this part of the harbour.

Former prison island, military fort (during the Crimean War) and a posh restaurant.

AKA the Fingerwharf, the largest wooden construction in the world. Once a working waterfront, with a fish-market and a ferry-wharf. Now the home of Hollywood actors, a 5 star hotel and upmarket restaurants.

Not the one in Tempe, but the original one an Woolloomooloo!

The Royal Yacht club of Australia - start of the Sydney to Hobart Yacht Race on Boxing Day.

First of as series of wealthy Harbour-side suburbs.

Double Bay, AKA Double Pay. The most expensive shops in Australia include Dior, Cartier, Louis Vuitton. Streets lined with Ferrari's, Bentley's, and all types of German cars.

No, we're not having a Thai massage. We're just seeing thje posh suburb of Woollahra. And Point Piper - the most expensive real estate in Australia, where properties cost an average of $12 million.

The largest bay of the 66 bays of Sydney Harbour.

Location of the first international airport of Sydney. An airport for seaplanes, AKA the Flying Ships.

A short walk across Parsley Bay to absorbe the atmosphere in this magnificent part of Sydney. Plenty of Rainbow Lorikeets in the Banksia's.

In summer we can spot an Eastern Waterdragon.

And its hamlet of wooden cottages on a peninsula, between the Pacific and the harbour.

The first bay Capt Philip saw after he had entered Sydney Harbour, and where he first set foot on Australian soil on 21 January 1788 - 5 days before disembarking in Sydney Cove.

Walk part of the famous Gap Walk to enjoy views over Sydney Harbour and the Pacific,

In winter and late spring/early summer we can spot Humpbacks and Southern Right whales on their yearly migration to and from the tropics.

Replica of the first lighthouse built in Australia, to a design of Frances Greenway - the convict-architect who helped Lachlan Macquarie built Sydney.

Starting point of the Bondi to Coogee Walk.

Older generations know it also as 'Little Bondi' , where some of them may still remember the trips in a Hot Air Balloons and a visit to one of the many an ill-fated Aquariums and other entertainment venturers that dotted the Sydney beaches at the turn of last century.

Terminus of the Bondi to Bronte Backpacker Express - the rip that takes you on a free, yet dangerous trip between Sydney's best known beaches.

Held every year in Darlinghurst.

The last chapter of Sydney.

Traveler pickup is offered
We pick up from all city hotels.

This tour/activity will have a maximum of 10 travelers


Very knowledgeable and flexible. Driver took us to many different parts of Sydney. There was a good balance with driving and walking.

Posted By : Mark B


Jelle gave a great tour of the city and surrounding areas. We’d booked as a group tour, but there were only the two of us. We got to do quite a bit of walking in several beach areas.


Good Tour Guide to lead us go the attraction , but the timing abit rushing.Total experience is good .


Excellent tour guide...went with the flow. Although he had bus trouble, he made swift arrangements for another vehicle and we wound up having a semi-private tour with only one other couple. We saw all of the highlights, stopping occasionally for photo ops and little walks where he would meet us at the other end of the walk...nice touch. We got to see Sydney from many different vantage points, fun neighborhoods and the less touristy places we never would have known about or known where to park. Bondi beach was beautiful. If y0u really want to get a feel for Sydney, this is a great way to do it in a short time...highly recommend this early on your trip!


Great guide - he hit all the neighborhoods and sites of Sydney except the Opera House. He was very knowledgeable about the history of the city and sites. Time at Bondi beach was just right.


Nice introduction to the city on our first day.


Guide was knowledgeable and took us to some point of interest that you wouldn't see with a tour bus.


Great tour to see all of the areas of Sydney! Was able to see the Opera House from Macquarie Park to Bondi beach as well as some of its affluent neighborhoods. I wish there was slightly more time to take pictures of some of the well known things in Sydney.

Posted By : Kristofer A


Very fun tour and a good introduction to Sydney and its history.