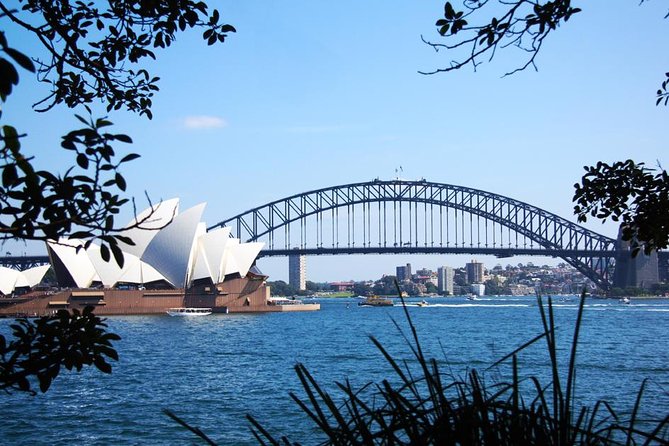 Discover Sydney's most famous sights on your half day tour. From the Sydney Opera House to Bondi Beach you will enjoy breathtaking views of this beautiful city. With your own private tour you have the freedom to adjust the itinerary below to exactly suit you. Chat with your expert guide on the day if you want to spend more time in one place and less in another. Your tour, your way

Sydney's original settlement - hear the vibrant stories of this area and its rich history, and see the many sandstone buildings hewn from the local rock which gives the area its name.

The gateway to the vibrant harbor of Sydney. The waterfront hub for the famous Green and Gold ferries, as well as the terminal for visiting international Cruise Ships.

Explore the forecourt of the iconic Sydney Opera House, as you experience the incredible architecture of this iconic building. Capture that once in a lifetime photo with one of the wonders of the modern world.

The famous "Coat Hanger", can be viewed from various points on your tour. Completed in the 1930's, this stunning bridge framed Sydney's beautiful harbor and there will be multiple places where you can view her in all her glory!

The home of the NSW Government, this beautiful 2 storied Georgian building is the oldest public building Sydney, and part of a complex of heritage listed sites that was once the General Hospital of the first settlement.

One of Australia’s most beautiful and significant buildings. This stunning Cathedral is built in an English Gothic Revival style and constructed of honey coloured Sydney sandstone.

Get that postcard perfect picture of the Sydney Opera House framed by the Sydney Harbour Bridge. Sit in the rock-hewn chair and hear the story of Mrs Macquarie!

Woolloomooloo is also known as Finger Wharf and was once an old cargo dock. These days it that attracts a trendy clientele with many fine dining restaurant and bars, with stunning harbour views from all angles.

The once infamous Red-Light district of Sydney. Learn about the rich and varied history and, although it is much tamer these days, see if you can spot its seedy underbelly.

Double Bay, known to locals as Double Pay because of its exclusive house prices, has been described as the Little Vienna of Sydney. Rushcutters and Rose Bay both sit right on Sydney’s harbour line and command amazing views across the bay.

Home to the famous Doyle’s Seafood restaurant, Watson’s Bay is a delightful suburb with a beautiful seaside park, the Watson’s Bay Hotel and fast ferries to run you back to Circular Quay. Enjoy the stunning view at The Gap where waves pound the rugged cliffs, and the Pacific Ocean stretches off into the horizon.

Bondi Rescue, Bondi Vet, Bondi to Coogee walk…what’s not to like about Bondi?! Catch a wave or go for a coffee along Australia’s most famous piece of real estate.

Home to glorious Victorian terraces, Paddington is truly a stylish destination. Get lost in the back alleyways and visit over 25 local drinking establishments or just sip a coffee or grab a delicious focaccia at the many gourmet cafes in the area.

Traveler pickup is offered
You will be picked up from your Sydney Hotel or other central location within 5km of the city centre. We can also meet you at the Cruise Terminal, Sydney International or Domestic Airports. Or pick you and your luggage up at either airport and drop you at your cruise terminal or vice versa.

For groups of 11 people or more, there is an additional fee of AUD$10 per person to accommodate your luggage for Cruise Ship and Airport pickups or drop offs. This can be paid to your guide in cash on the day, or we can send you a payment link to prepay by credit card.

You will need to load and unload your own luggage. Our guides are not professional porters and under Work, Health and Safety regulations are not permitted to lift heavy bags.

When travelling between the 15 December to 6 January and between 23 January to 5 March, there is a AUD$100 fee (payable to your guide by cash or credit card on the day) if your pickup is outside the standard times of 8am and 1pm.


Half day tour. Danny, our guide, was terrific. Very knowledgeable and accommodating. We saw everything and totally enjoyed his narrative. Would book him again for another tour!


If you are unable to see eveything this is the best way to see all about Sydney. Our guide, Bettina was awesome. She knew so much about the city We found it very informative and fun.

Posted By : Karen B


Jason picked us up from the hotel and took us all over town. He took us to Bondi Beach, the Sydney Opera House, and other main attractions around Sydney. He was knowledgeable, professional, and humorous. We totally enjoyed this tour and felt like we understood the area better when the tour was over. When we were done he returned us to our hotel. It was a great way to see Sydney in 4 hours.


Our tour thru Sydney was a joy. We saw the highlights of the cit with a knowledgeable and personable guide. She took us to all of the highlights and made our stay much more interesting. We were able to make better choices for other sightseeing as a result


Our group of four booked this tour. Essie was our guide and drove us all around Sydney telling us stories and showing us the sights. I enjoy this type of tour so much more than a bus tour. You can ask to see specific areas and have great interaction with the guide. Thanks Essie for a great tour.


When you only have a half day to explore in Sydney this is definately the way to do it. The driver/guide was very knowledge and catered to what I wanted to see and do. He picked me up from the hotel 30 minutes early so even more time to tour and drived me at the airport in time to catch my flight home. Would definately book this again.


It was unfortunate that Sydney rained with strong wind when we arrived. We tried our best to enjoy the city. Unfortunately the defrost system did not work. So, the who bus was all fogged up. The lady driver/guide, Jen, tried without success. She called back the office many times and no one seemed to know how to solve the problem. But she still tried to show the city, and it was very dangerous because she could not see the road very well. I sat in front and kept wiping her side of the window for 2 hrs.
After that she called the offi e again, this time she find the solution. Overall it was very bad experience.
I am not blaming the weather, but the operator should have checked the condition of the mini van ahead