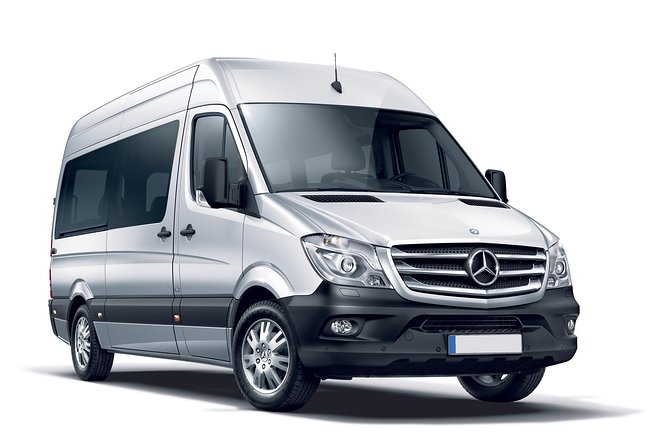 Book your shuttle transfer from Sydney airport with Sydney's largest dedicated shuttle service provider with over twelve years of experience in the industry. A range of modern well maintained and air conditioned mini buses operated by courteous and professional drivers guarantees your safety and comfort while travelling between Sydney airport and Sydney city. Door to door service ensures you to be taken to the door steps of your destination in Sydney city. Vehicles run a frequent and reliable schedule all year round including all public holidays so you never miss your shuttle. The areas covered include all of Sydney CBD, Kings Cross, Darling Harbour, The Rocks, Ultimo, and Surry Hills.

Infants travel for free provided they do not occupy a seat

Each traveler is allowed a maximum of 1 suitcase and 1 carry-on bag. Oversized or excessive luggage (e.g. surfboards, golf clubs or bikes) may have certain restrictions, please inquire with the operator prior to travel to confirm if your excess luggage is acceptable

This tour/activity will have a maximum of 13 travelers


Driver friendly and helpful. Shared shuttle not a way to go directly to your destination, but adequate.


We arrived late at the airport. Had a difficult time finding pickup location. Called for p/up and said it would be 1/2 hr so we found a nearby bench and waited. Within 10 minutes a van pulled in and the driver came looking for us. Very nice ride into the city and right to hotel.


It is definitely a hassle free way to get from the airport to the hotel after a long journey. The driver could have been more friendly/welcoming but regardless a good idea.


Our scheduled pick up time was 6:00 pm we called them from the pick up point at 5:55. They told us it would be 45 minutes at 7:00 pm we called again and they said it would be another 15 minutes they finally arrived at 7:30. The driver was ok but there was no excuse for an hour and a half wait

Posted By : Rhonda A


Waited for at least 40 minutes after phoning company for pick up. After driver arrived he went off and did not return for 10 minutes. Rest was OK


We landed in Sydney from Cairns at 15.41 which was 11 mins late and after collecting our luggage we were at the designated meeting spot for around 16.15. I tried calling the number advised about 9 times but kept getting cut off. Don’t know why I had to call as they had our flight details and I confirmed the day before by email that I would be at the meeting point - what’s the point in providing flight details if they don’t monitor!!!!! Various other uplifts from alternative pick up companies all said that the Company booked were the worst of all and never turn up. Eventually another company phoned on my behalf and I spoke to the operator around 16.45 who said she would get a bus sent over to pick us up ....... we waited around another 30 mins before our coach arrived and did not get to our Hotel until just before 18.00 for what I was led to believe was a 30 min transfer. No complaints against the driver who was very friendly. Unfortunately the same company are booked to take me back to the airport in 4 days...... fingers crossed . I will be in touch with Viator requesting a refund for my fare , roaming costs on my UK mobile and for 9 cut off calls.


Arrived at terminal after collecting luggage no shuttle driver. Called the telephone number per instructions and after several minutes of ringing got no answer and was disconnected. We even had the airport information center all and they got the same response.
Purchased a shuttle ride from another company